Prologue.
FoE bot appeared pretty much accidentally. I was applying for Senior Flash developer position at Innogames at the beginning of 2014. I successfully passed first 2 interviews and had to prepare myself to the last important one. I did not have games in my portfolio and decided to impress the company by cracking some of their online games. I had one weekend for that but eventually succeeded in much less time. It took me just few hours to find the core algorithm which made this bot possible (however, it took more time to build the rest of functionality). Eventually, I did not pass the last interview but decided to try my bot as some kind of experiment. It went successfully – I was at the top of rating list 2 times, a year ago and half a year ago, without spending a cent, surrounded with users who spent thousands of dollars. It took me quite a lot of time to finish this article, approx. 1 year. I also have to say that Innogames knew about the bot but seemed to ignore the fact. First, I told about it to some lead developers and top managers who were present on my third interview. Next, I mentioned it on another interview in half a year to some Forge of Empires developer. I still can use my bot today, nothing changed on their side. Eventually, it just happened that I had a conversation with another top manager from Innogames today and decided to finish the article. And yes, Innogames, I have found your custom header: “X-JoinUs: If you found it and want help us improving our Games, go to career.innogames.com and mention this header!” – which is there for at least last half of a year.
I am not providing compiled FoE bot and have no plans to do this in the future. Please, do not ask for it neither in comments nor in private messages. The code is no longer available. However, it is not 100% functional. There are few parts which use the code from the game itself and I removed them from the repo. Following article has some instructions how to find that missing code. I will also not provide any instructions on how to compile the bot or use it. I never had plans to distribute it or to teach people how to use it. The code itself is quite a mess, so is pretty much an example of how NOT to write the apps.

Current Forge of Empires Bot consists of built in browser which you use to login into the game and play it just like you used to. It also has several automated features which work behind the scene as well as number of manual ones. 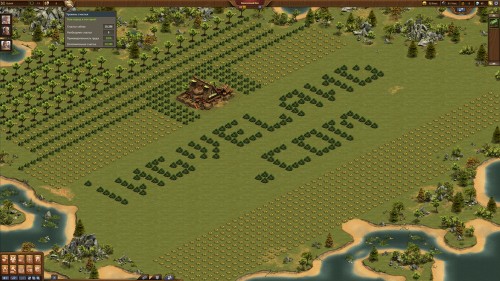 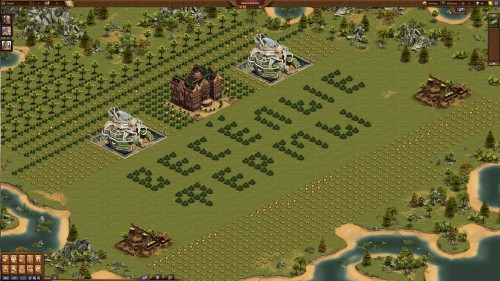 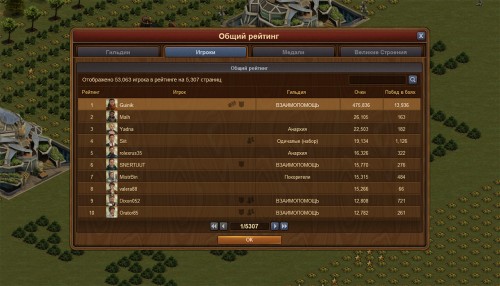 Town Halls museum would never appear without this bot.

Forge of Empires is MMO game developed by German company InnoGames. They claim to have over 14 million registered users in it (at least, this was true at the beginning of 2014 year).

The first step is to find out the structure of the data which is used for game-server communication. Fiddler is one of the best tool for this purpose (this application is for Windows only, so you should find the alternative if you are on Mac). It is debugging proxy which you can use in many situations when you need to check or modify HTTP(s) traffic. 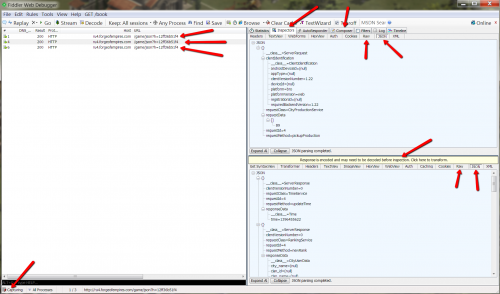 Fiddler’s window consists of several parts. The list of captured requests is to the left, and tools are to the right. We are interested in Inspectors and Composer. Sometimes AutoResponder may also be very handy. The data of the particular request is populated in Inspectors upon selection from the list. Inspectors themselves consist of top part for request and bottom part for response. Inspectors have different views which allow either to see particular part of request/response (e.g. Headers) or format the data (e.g. JSON, XML). Fiddler will also suggest you to decode the data if required. Sometimes you need to temporary stop capturing new requests. The easiest way to do it is by clicking in the bottom left corner on “Capturing” word. The word will disappear, but you can click the same place when you need to re-enable capturing process.

Let’s start investigating the communication process. We can perform some actions in the game, like picking up productions, moving buildings, reading list of top users. We can see that all requests have same simple url. The url does not change with different requests and looks like following:
http://ru5.forgeofempires.com/game/json?h=457ee95a4af
All payload is sent as JSON. The communication is performed via HTTP, the data is not encoded at all and you can easily study its structure.

We can perform some simple tests right now and decide whether we are going to move forward. Composer tool in Fiddler will help us in this task. Select it and then simply drug and drop any request from the list into the composer. All fields will be populated with data from the request so you have its clone. Picking up the production from city entities is one of the basic actions in the game. It is also nice first target for the bot because shorter production period gives more income. We need to answer several questions: can we perform API requests outside of the game; can we modify the request; can we modify the response.

To do this, delete all captured request in the Fiddler first, just to keep things clean. Simply select everything and click Delete button. Go to the game, pick up the production from some building, then go back to Fiddler and drag and drop the request to Composer tool. Click on Execute button. Select new request in the list and go to Inspectors. Great, we see absolutely valid response there – no errors. OK, we can send requests to the server outside from the app and the backend eats it. Now, we need to find out if we can really use this. Go back to the browser and refresh the page. Nothing changed, the amount of resources stays the same. Let’s wait till resources from same building can be collected. Then, do not pick them up. Instead, go back to Fiddler and click Execute button in Composer again. Now, everything worked as we wanted – the production was picked up, which you can see by refreshing the browser again. So, we used 100% the same request like before, and it worked. Thus, we already have something. Let’s move forward.

We are going to alter the request now and see if this works. Each request contains 4 variables which are different in different requests: requestClass, requestData, requestId and requestMethod. Also, only 2 of these properties are different for similar requests (for example, picking up gold from the building): requestData and requestId. It is easy to find out that requestId is integer incremented with each new request. It also looks like it is not important for us because we successfully performed several requests with same id. Let’s pick up the gold from another building and investigate the request. We see that the only part that has been changed is some integer in requestData. It looks like this is the id of the building. Paste it into our request in Composer, changing the id there, and then click Execute. Oops, we got error response this time. There is another part of the payload which is different in different requests and we missed it – some hash prepended to JSON object. Obviously, it is generated inside the app. We need to get the app file now, decompile and investigate it.

Fiddler also helps as to find the url for main swf file. Look at our previous requests in Inspectors>Headers. There is a header
Referer: http://foeru.innogamescdn.com/swf/Main.swf?1429602617
which is what we are looking for. We have the file now. Then, we need some decompiler. I suggest following open-source flash decompiler: JPEXS Free Flash Decompiler (https://github.com/jindrapetrik/jpexs-decompiler).
I have to say that I really love the code of the game. I think it is written very well and has very nice and clear organization structure. I believe this plays crucial role when some new developer starts working on the app. However, at the same time it makes the process of investigating the code easier. Also, it looks like the code is not obfuscated at all (well, I think this was true a year ago. I had another conversation with some FoE developer last summer and it seems that they started to obfuscate the code now, though not much. I am not sure if this is a result of our conversation). This was not hard to find the place where hash code is generated. However, I will not post it here. After all, this is Innogames’ commercial product and I want to respect this fact. You will not find this part on GitHub as well. You need to find it yourself if you want to compile working bot. The hash algorithm consists of JSON payload, some hardcoded salt and another dynamic salt. It is clear that the second dynamic salt goes from the request’s url. It is some session id
http://ru5.forgeofempires.com/game/json?h=457ee95a4af
At this point, we can test everything and answer the question if we can build our own requests. Create some simple Actionscript 3 project to generate required payload. Paste generated data into Composer (leave all other fields as they are. The only thing that you may need to change is the session id in the url). Click Execute. Everything works. At this point, we have working core methods to build our bot. It took me just few hours to investigate the algorithm.

There is one drawback of our bot. It’s not absolutely automatic. We need to change session id manually each time it is changed (not often, but still we need to do this). Also, we hardcoded ids of city entities. They are changed each time we add or remove some building and we need to provide these new ids manually. Really, not an elegant solution.

Let’s check some simple places to find if the session id exists there. My first idea is to look at headers. Fiddler will help us here as well. Clear the list of requests and update the page with the game in the browser. Then check several requests which goes before the one with session id in the url. Nothing there. Next logical place to check is the html code of the page where the game is embedded. We are lucky this time. The session id is there in plain text located in flash vars.
'string_gatewayUrl' : 'http://ru5.forgeofempires.com/game/json?h=998898c26ea'
We need to load the game inside the bot to get the session id dynamically. This is easy to achieve with HTMLLoader

The last thing that we need is to get the ids of buildings dynamically. Just look at some first requests in Fiddler. There is one response from the server with relatively large payload. It contains the data to build the city. Everything that happens next is just routine procedure of investigating different JSON data structures and getting the one you need.

There are a lot of other features which can be added to the bot. Some of them can be pretty interesting, for example, the statistics of top users or guilds etc. Also, it’s relatively easy to build guild manager which will show so long-requested statistics who add goods to the guild’s treasury. However, there is no firm plans to support this bot in the future and to add new features.

Some images of my first city and positions in ratings: 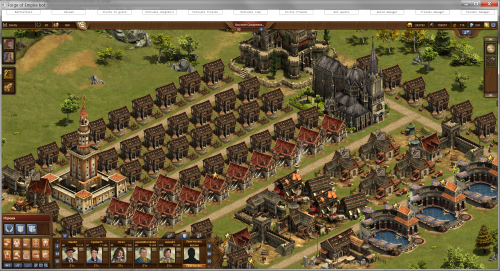 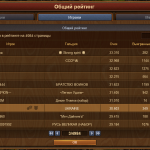 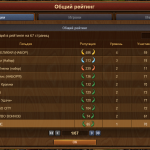 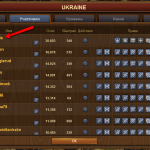 . The code is no longer available. Please, read License and Readme before using it.

Some ideas how to find such bots or prevent their existence may come in the future (or may not 🙂 ).