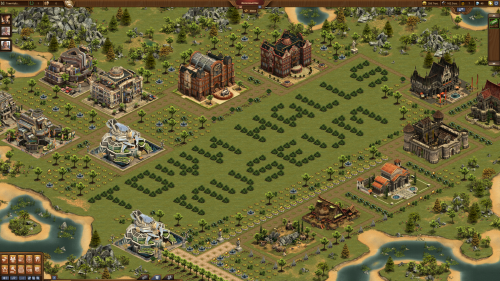 Town Halls museum is now open!
Enjoy the architecture of different eras and stroll around lovely gardens. This is an open-air museum which works in any weather conditions.
Working hours: 24/7
Free admission for everybody. Flowers for children, ice cream for ladies.
Getting here: go by foot, drive or take your favorite airplane until you reach world “Кроуч” (Korch world on Russian servers; ru10; http://ru10.forgeofempires.com/game/), find username Guinik.

Prologue.
FoE bot appeared pretty much accidentally. I was applying for Senior Flash developer position at Innogames at the beginning of 2014. I successfully passed first 2 interviews and had to prepare myself to the last important one. I did not have games in my portfolio and decided to impress the company by cracking some of their online games. I had one weekend for that but eventually succeeded in much less time. It took me just few hours to find the core algorithm which made this bot possible (however, it took more time to build the rest of functionality). Eventually, I did not pass the last interview but decided to try my bot as some kind of experiment. It went successfully – I was at the top of rating list 2 times, a year ago and half a year ago, without spending a cent, surrounded with users who spent thousands of dollars. It took me quite a lot of time to finish this article, approx. 1 year. I also have to say that Innogames knew about the bot but seemed to ignore the fact. First, I told about it to some lead developers and top managers who were present on my third interview. Next, I mentioned it on another interview in half a year to some Forge of Empires developer. I still can use my bot today, nothing changed on their side. Eventually, it just happened that I had a conversation with another top manager from Innogames today and decided to finish the article. And yes, Innogames, I have found your custom header: “X-JoinUs: If you found it and want help us improving our Games, go to career.innogames.com and mention this header!” – which is there for at least last half of a year.
I am not providing compiled FoE bot and have no plans to do this in the future. Please, do not ask for it neither in comments nor in private messages. The code is no longer available. However, it is not 100% functional. There are few parts which use the code from the game itself and I removed them from the repo. Following article has some instructions how to find that missing code. I will also not provide any instructions on how to compile the bot or use it. I never had plans to distribute it or to teach people how to use it. The code itself is quite a mess, so is pretty much an example of how NOT to write the apps.
END_OF_DOCUMENT_TOKEN_TO_BE_REPLACED

Getting started with Playscript – compiling your first Monotouch-Actionscript hybrid app

“PlayScript is an open source Adobe ActionScript compatible compiler and Flash compatible runtime that runs in the Mono .NET environment, targeting mobile devices through the Xamarin Studio MonoTouch and Mono for Android platforms” says the first sentence of its readme on GitHub. I have written this tutorial for those who want to quickly start playing with Playscript.

We will create simple iOS app In Xamarin Studio. This app will use native control (UIButton) and Actionscript 3 class which will supply button’s label. This tutorial targets developing with Monotouch. This means that you need corresponding license to compile the app on real device. It’s worth to note that all steps in this article is based on current versions of available binaries and source code (it’s 14 Apr 2013 today). And some of them may not be required in the future.

END_OF_DOCUMENT_TOKEN_TO_BE_REPLACED

After spending hours trying to compile Playscript-mono on Windows (Windows 7, x64), I have realized that I should share my final procedure. Please, note, that I am not command line savvy person and actually this was my first large compilation. Thus, I can not guarantee that it will work in all cases. But hopefully it will be helpful for someone.

If you do not want to bother with building Plascript from source, you can find links to compiled binaries on Playscript GitHub page.

END_OF_DOCUMENT_TOKEN_TO_BE_REPLACED

This is the test to check relative difference in performance on mobile device.